Coyote Steals a Drink is a Karuk story told in the Karuk language by Julia Stewart and translated into English by William Bright, printed in Bright's A Coyote Reader. (Bright 1993) The story focuses on Coyote's gluttonous nature, a side effect of his curiosity; and is an entry in the Karuk story-circle of Coyote's question to get money. "Karuk", in the language of the same name, means "upstream", and the peoples referred to themselves as "Arra-Arra", meaning "Men/Humans". They were a fishing people by the Klamath River, but due to lack of redwood trees had to buy canoes from the neighboring Yurok. (Erdoes and Ortiz 1998)

This story will be approached with the Immanent Art process in mind, which will try to explain how it means what it means, verses what it literally or figuratively means.

The man who collected this story, William Bright, wrote many books on Coyote stories and Native American studies, and was also the first Honorary Member of the Karuk Tribe of California. (Bright 1978) (Bright 1993)

Thirsty Coyote sees some gooseberry juice, and ends up drinking all of it.

When one studies an oral performance, or a armchair folklore version of studies an oral performance by studying transcripts other have collected, with the Immanent Art approach, it is important to keep in mind the purpose of the approach - to find out what makes the tradition and performance "Art". Many philosophers and artists have pondered "What is art," while many historians have found that art is one of mankind's most primitive needs. Besides the use of adjectives to add descriptions, the Immanent Art approach concentrates on recurrent phrases, scenes, and story-patterns as clues of more-than-literal meaning. (Foley 2002)

The recurrent stories of Coyote himself throughout nearly all Native American oral traditions could be approached with Immanent Art, but in this case we will look at just the story of Coyote Steals a Drink. The register of many Native American traditions is very similar to that of the common register of everyday talk, but it wouldn't be a tradition without its own rules and regulations. The most recurrent phrase in this story is the word "And". Nearly every line begins with "and" or "and he" which adds a nearly poetic feel to the performance. Beginning every sentence with "and" is not common for the language of Karuk. (O'Reilly 2002) On paper and in the transcript box above it lines up neatly and orderly, but due to lack of the recording of the original performance, it is unknown if each "and" was said the exact same way. The word in itself makes the reader think that all of this is happening at once. It is also a very basic word used to show progression. By beginning nearly ever line with "and," the performer, Julia Stewart, breaks the story into thirteen sections, each about equal length, but there is no pattern to line length. There are other aspects to the register, including how the first and last lines are nearly mirrors of each other. 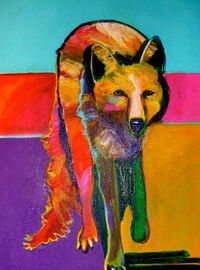 The recurrent use of Coyote adds a communicative economy factor to the presentation of the story, as Coyote needs no introduction and it is known that he will be up to no good in the story. Additionally, when this story is told in the full story-cycle, his adventures would built on each other, and people would know that he would be getting thirsty, or he had just quenched his thirst, based on the surrounding stories. In this case, "Nephew" could refer to anyone and not Coyote's real wife. In many tribes, other people are referred to as "brother" and animals of different species are "cousins" or "nephews", dependent on many factors including ages. (Mason 2006) This stems from the cultural belief that nature is all related.

The performance arena of this story could be anywhere. No information was found in the book which this story was found, but the circumstances for telling this story can be postulated. It is not the only gluttonous story of Coyote. In fact, many of the stories in the Karuk story-cycle of Coyote traveling upstream for some money involve him stealing food or over-eating. (Bright 1993) This story could be told in times of teaching a lesson to a child, especially when they are drinking too much of a drink too fast.

An explanation for a naturally occurring event is not explained in this Karuk, story, but a morality lesson is easily detected. The lesson is that being a glutton is rude to other people, especially if you run away and do not replace or repay for what you consume. Theft is also a part of this story, and it can be postulated that Coyote will reap what he sowed later in the story-cycle, as he often gets punished for his actions.

See Talk:Coyote Steals a Drink for questions to think about and discuss.

Retrieved from "https://oraltradition.fandom.com/wiki/Coyote_Steals_a_Drink?oldid=3386"
Community content is available under CC-BY-SA unless otherwise noted.