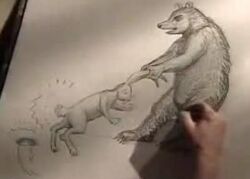 Rabbit's Short Tail is a Cherokee trickster story told by Gregg Howard. The video was recorded with an audience of children and parents, and was uploaded onto YouTube.com on June 13, 2007 to gain attention for the DVDs of other performances sold on a website. Accompanying Gregg in his performance is an unnamed flute player who accompanies him throughout the entire story, but not during his introduction. The introduction explains to the audience of children, in very simple terms, that the story was an explanation of "the way things are", a recurring purpose of Native American stories. (Thompson 1929)

Similar to Grandma Coyote's tale, Gregg refers that the story was told to him by his grandfather. This important of reverence to elders is reflected in the children's attentive eyes in ears in the video. (Grinnell 2008) Gregg uses many Cherokee words in his performance. Not all of them were entirely decipherable, so they are represented by <Cherokee>. Likewise, he makes audible grunts and other noises that are represented within "< >"s. The name for rabbit used in the story is "Tsi-s-du", pronounced "Gestew"; the fox is "Tsu-la", pronounced "Chula"; and the bear is "Yo-na" pronounced "Yona". See Manataka.org for more Cherokee pronunciations and words.

A hungry Rabbit, or Tsi-s-du, is tricked by Tsu-la Fox to use his tail in a frozen river as a fishing pole. After it gets frozen in the lake, Yo-na, the Bear pulls Tsi-s-du off of the ice, ripping his long tail off.

Immanent Art seeks to understand the idiomatic implications of the building blocks of an oral performance. It concentrates on recurrent phrases, scenes, and story-patterns as clues of more-than-literal meaning. (Foley 2002) While these building blocks may seem similar to keys to performance, they focus more on "how" they mean to the audience what the non-literal implications are.

The register of the story of Rabbit's Short Tail and that of the Cherokee tradition is similar to the registers of other Native American Oral Traditions. Stories of these traditions are generally told in a very straight-forward style with a high emphasis on nature. Long adjective sequences are rarely used, and each character has its characteristics already built into them, similar to how their motives are built into them. This is mainly accomplished because the material of the tradition is material that the audience is familiar with. The Native American style of story telling also focuses highly on repetition and recurrence. Repetition occurs in this story when Gregg is describing how Rabbit is very cold and very hungry. Rather than say "He got very very hungry", Gregg says "He got hungrier, and hungrier." This seems to not only show a progression of time but reinforces it's importance to both the story and Rabbit's motive by repeating it instantly.

Finally the communication economy of the performance is extremely important to it's success. Although the audience on the story doesn't seem to be Cherokee, they still understand the story. Gregg does use some Cherokee words to add distinction to his performance, but it can be assumed that the original performances of these tales hundreds of years ago would be in the language of Cherokee. Either way, Gregg's performance holds an economy with the children and their parents present in the room. One aspect of this economy is shared experience. The children know what a rabbit is, so the performer does not have to focus on explaining what a rabbit is. Gregg does make two asides to the audience, and his verbal cues hint that it is an add-on to the story, in case they do not understand. The asides do not really affect the performance because they teach the audience, which is an important requirement for the tradition in the first place. (Grinnell 2008)

Like the majority of other Native American stories, this story teaches a lesson. It teaches "the way it is" on why rabbits have short tales. It also could teach the children that being a trickster can make people want to play tricks on you. It could also teach children that they should not go out and try any "get rich quick" schemes, or double check advice before you blindly accept it.

See Talk:Rabbit's Short Tail for questions to think about and discuss.

Retrieved from "https://oraltradition.fandom.com/wiki/Rabbit%27s_Short_Tail?oldid=3459"
Community content is available under CC-BY-SA unless otherwise noted.